hey all, after discussions w/ various members I decided to close up shop here and move th show completely over to

halohalomofoko! Most of y'all are already over there anyhow, and it just makes sense not to divide what is a small tribe to begin w/! Thank you for yr muscle + brains.

Picturebox is also having a sale this week.

i just thought you guys would like to know that top shelf is having their insane $3 sale. hurry up and grab stuff before it's all gone!

Are there any writers about comix that you follow?

I'm also considering consolidating our two comms into one, for administrative ease and for aesthetic reasons. If anybody's got arguments pro/con, y'all better speak up now.

What y'been readin'? Old, new, whatever. Comix, non-comix--recommend me somethin'.

Due mainly to my own special RACISM against manga, I don't know a whole lot about Tezuka, though it's hard not to be aware that he is a TRUE GIANT of comix, someone whose influence in culture is so broad and deep that it becomes virtually synonymous w/ culture and therefore almost invisible--sort of th way Disney in America is @ once invisible and in-yr-face. Th thing that distinguishes a guy like Tezuka from a guy like Disney is that Tezuka's an artist first, iconic visionary second.

Well, slightly embarrassed by my lack of Tezuka literacy, I spent this past week reading Ode to Kirihito, an 822-page story that was originally serialized in 1970-71. Th book's inside cover copy states that Kirihito was said to be Tezuka's personal favourite of his works, so it's probably a good place to start.

"Where to start?" is a particularly vexing question for anyone curious about Tezuka because th man made over 700 manga totalling over 150,000 pages (says Wikidpedia).

I have to tell you that I have made 9 pages of comix in my lifetime, and my hand almost fell off from it; so Tezuka's numbers strike me as impossible, godly.

More important than th length and girth of his comix penis, though, is th consummate skills w/ which he fucks you, all night long if you want, for yr whole life if you are his wife!

This guy really does not fail to tell a story in every fucking panel. I just finished reading 822 pages, and it was so well-lubed I could barely tell it was in me! Just kidding. But really, this guy does not waste panels, th story's always in motion. There are quiet panels of mountains and fog, a secluded hut @ night, a drop of water making ripples in a puddle, etc.--all of these are critical to Tezuka's pacing.

He builds his pages w/ an extraordinary sense of playfulness, constantly experimenting w/ different shapes/sizes of panels, different "camera angles", odd juxtapositions of images that don't make literal sense but do extend his metaphorical reach. All w/o interrupting his magnificent flow.

And he can draw like a motherfucker. Both his nature scenes and urban landscapes communicate a grand scale. Th environments his characters inhabit are three-dimensionally alive. His car chases are fast.

I don't like how he draws people's bodies, but this has always been my trouble w/ manga, and I can't be beefing Tezuka on this. Motherfucker practically invented manga. He invented a lot of things; before Kirihito, th "medical thriller" genre did not exist (says one Japanese guy in a back-cover blurb). He invented a character named Reika, th Human Tempura. What's a miracle is that all of this experimental and innovative and bizarre junk came out accessible. You don't get to be as big as Disney by wanking inscrutably in a corner. Tezuka seems to have mastered a melodramatic, soap-operatic style that attracts snobs and peasants alike. Like a Stephen King or a Douglas Sirk. A Will Eisner, a Radiohead, an Orson Welles.

When he was younger, Tezuka's arms swelled up and he became ill. He was treated and cured by a doctor, which spurred him on to study medicine at Osaka University. However, he began his career as a manga artist while a university student, drawing his first professional work while at school. At a crossing point, he asked his mother whether he should look into doing manga full-time, or whether he should become a doctor. This was an especially serious question since, at the time, being a manga author was not a particularly rewarding job. The answer his mother gave was, "You should work doing the thing you like most of all."

He graduated from Osaka University and obtained his medical degree, but he would later use his medical and scientific knowledge to enrich his sci-fi manga ...

To choose to do something radically different in a society wherein difference is routinely punished? Thet's love, aso. And this: "He was tormented by his classmates because of his skinny build, small stature and wavy hair." Until this week, I was one of those classmates. My bad, Little T.

Do bring it on, 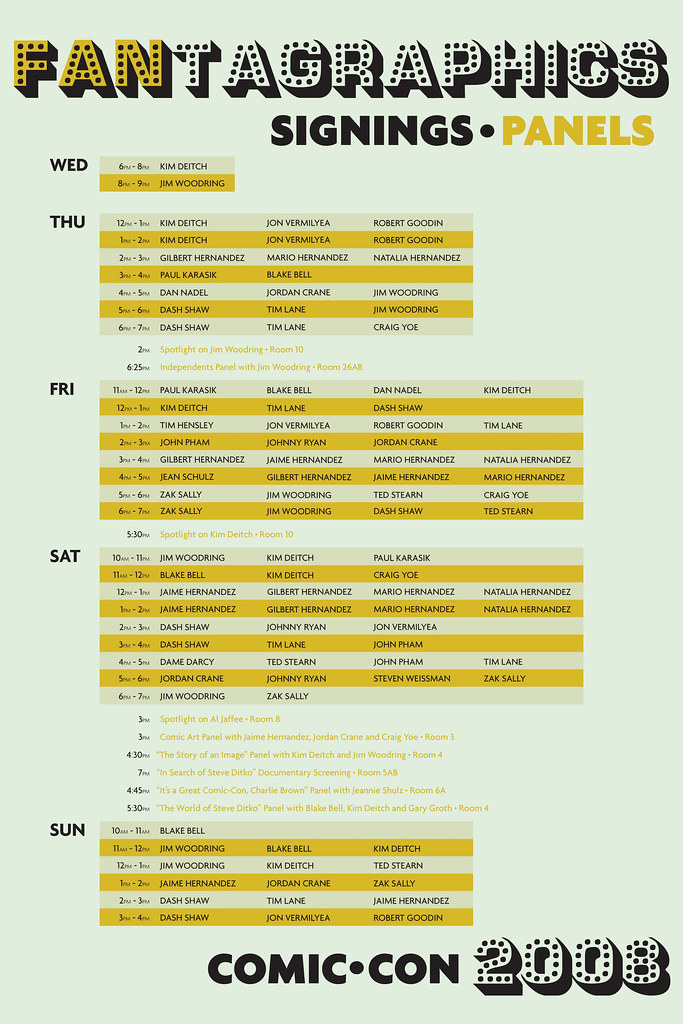 sorry for the largeness, but it's exciting stuff!

interesting but possibly bullshit comparison between John Updike and Chris Ware: nutshell version: both are genius "writers" on th paragraph/panel/page level, but both have failed to create enduring characters and plots/stories.

In other news, are we done w/ Round 3 voting here? Tezuka-san is up 5 to 1 over Eddie Campbell. Other heavies still on th board, jest off th top my head: Charles Burns, Crumb, Hank Ketcham, Justin Green, Will Eisner, Posy Simmonds, etc., etc., etc., etc.!

Finally, here is a short movie some dude made from a poster Xaime Hernandez made for Bob Dylan's XM radio show:

One of the most prolific creators ever, Tezuka Osamu created a number of long masterworks that vary greatly in tone and content, including Phoenix, a cross-time-space oddessey, Black Jack, the story of a brilliant rogue doctor, the widely loved Astroboy, historical epics like Buddha, and many, many more. Tezuka constantly experimented with layout and storytelling techniques, but like his analogue in the film world, Akira Kurosawa, balanced experimentation with universal themes, appealing characters, and robust storytelling.

One thing that I love about Tezuka is the way his accessible, cartoonish style can carry massive epics. He blends the trivial and profound on the same page. Blah blah blah. He's a genius!

not sure if you (or anyone else) have seen these, but i really enjoyed them.